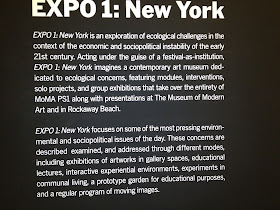 Expo 1: New York, focuses on some of the most pressing environmental and sociopolitical issues of the day. It takes the urgent and pragmatic sensibility of “Dark Optimism” as its position. Dark Optimism addresses ecological challenges set against the backdrop of economic turmoil and sociopolitical upheaval that has made a dramatic impact on daily life. In response to these global challenges, the magazine and editorial collective Triple Canopy calls for “dark optimism,” an attitude that encompasses both the seeming end of the world and its beginning, one that is positioned on the brink of apocalypse and the onset of unprecedented technological transformation. Climate change has generated storms, droughts, and floods that occur with greater frequency and severity. Economic volatility around the world has precipitated political action, giving rise to manifestations and uprisings in regions such as Northern Africa, the Middle East, Western Europe, and New York’s Wall Street. Meanwhile technological innovations and novel architectural initiatives offer the tantalizing promise of a brighter future. Recent advancements have facilitated communication – which at times has helped organize political protests-as well as access to information with such ease and volume that it threatens to become overwhelming in scale. The works exhibited in Dark Optimism make note of these paradoxical conditions and the instabilities of both natural and artificial systems. - wall text at PS1 MoMA

I’ve made three visits to PS1 MoMA’s exhibition Expo 1: New York, Dark Optimism, and have tried unsuccessfully to find anything in the exhibition that reflects the museum wall statement quoted above. As a curator who has focused on working with ecological artists for over a decade, I went to PS1 with excitement to see this challenge (finally) being taken on by a major New York institution for contemporary art. The show was organized with good intentions in direct response to the effects of last year’s Hurricane Sandy and its far-reaching impact on our local environment and economy, on coastal communities and in New York City. Unfortunately I have to express my disappointment. The works in the exhibition refer to the title Dark Optimism, presenting the dark, apocalyptic and catastrophic in current art trends.  My co-curator of the landmark 2002 exhibition Ecovention, Sue Spaid, aptly calls it “catastrophe art” in her review below. Sadly missing are examples of the many important artists working today whose efforts do offer some cautious optimism. Our environmental situation is dire to say the least. Myriad issues conspire towards our demise - climate change; land, sea and air pollution from the relentless extraction of fossil fuels; oil spills and nuclear leaks; habitat destruction; species extinctions; the list goes on and on.
In the New York area alone there are numerous artists, established and emerging, making profound and inspiring works that tackle these issues, but they are not represented in this exhibition. Brandon Ballengee, Lillian Ball, Joan Bankemper, Jackie Brookner, Betsy Damon, Michele Brody, Wendy Brawer, Mel Chin, Elizabeth Demaray, Peter Fend, Katie Holten, Natalie Jeremijenko, Habitat for Artists Collective, Kristin Jones, Eve Andree Laramee, Ellen Levy, Lenore Malen, Mary Miss, Maria Michaels, Mary Mattingly, Aimee Morgana, Eve Mosher, Leila Christine Nadir, Cary Peppermint, Aviva Rahmani, Andrea Reynosa, Christy Rupp, Jenna Spevack, Alan Sonfist, Katrin Spiess, Tattfoo Tan, Mierle Ukeles, – to name a few. And that list doesn’t include the many artists outside of New York, internationally, or the hundreds of painters and photographers who make work representing and bringing awareness to environmental issues. No exhibition can be completely inclusive – but a show on ecological challenges in New York City has been long awaited and this is a real missed opportunity to give the topic the seriousness and depth it deserves.
Thanks to the daily programming of lectures, debates and discussion by Triple Canopy at PS1 in conjunction with the exhibition - Speculations (“The Future is____________”). A few of the artists I mentioned above, Natalie Jeremijenko, Mary Mattingly and Mierle Ukeles along with Agnes Denes (Denes is one of two historical ecological artists included in the show, the other is Meg Webster whose 1998 PS1 commissioned installation of Pool was recreated at the invitation of Alanna Heiss) were invited to come discuss their visions for the future and give a presentation on their works that go beyond addressing environmental challenges to offering creative, imaginative and pragmatic approaches to the dire problems we face. That is what I call optimism.
Expo 1: New York “Dark Optimism” remains on view through September 2, at MoMA PS1
Amy Lipton
Curator ecoartspace NY 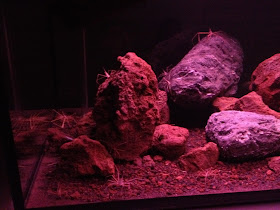 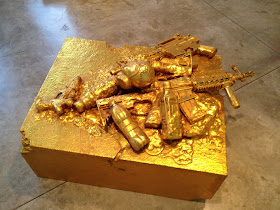 The curators claim that Dark Optimism reflects the future that is, “if you want it to be there,” yet few artists here glance forward and most treat catastrophes too lightly. Given wolves’ moose diets, Mircea Cantor’s short video Deeparture (2005) proved to be incredibly scary, as I envisioned the wolf devouring its lone cohabitant. Belittling lynchings, Mark Dion’s Killers Killed (2004-2007) features nine tarred and lynched predators. As remarks on consumer excess, Klara Lidén’s nine trashy trashcans and John Miller’s gold-plated recyclables feel trite.
No “catastrophe art” exhibition would feel complete without Chris Burden’s model Titanic ships balanced on the Eifel Tower, Latifa Echakhch’s shattered tea-glass installation, Mitch Epstein’s menacing power-plant photographs, Paweł Althamer’s outerspace zombies, or Pierre Huyghe’s staged battle between elegant arrow crabs and a hermit crab inhabiting Brancusi’s Sleeping Muse.
Premised on utopia’s twin promises of harmonious nature and technological liberation, “catastrophe art” actually distracts us from Earth’s generosity, leaving us unwilling to face our destructiveness fully and practically. Only Ugo Rondinone’s sensorial soundscape and Dan Attoe’s intriguing paintings rise above this exhibition’s passivity towards disaster, precisely because they invite possibility. Attoe’s hidden messages warn people to pay attention to past mistakes, and remind us, “This world has everything that you could ever want.” 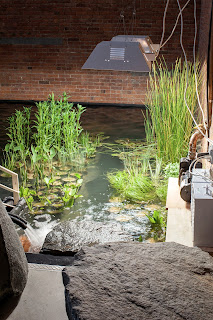 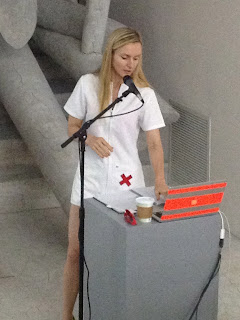 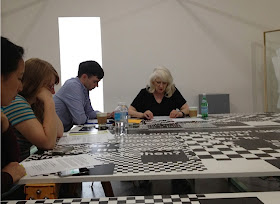